Back when the hole in the ozone layer was our principal worry about human contributions to environmental degradation, this South American territory straddling Chile and Argentina was one of the bellwethers for excessive UV exposure (remember blinded sheep in Tierra del Fuego?).

Now the same area is offering us an ominous preview of coming attractions. The glaciers of Patagonia are melting far faster than similar bodies of ice elsewhere in the world:

Their contribution to global sea-level rises may be minuscule, but it is the increase in the rate of melting of the Patagonian that has scientists paying attention. The glaciers flowing from the steep mountains on the tip of the South American continent, have been one of the most visible of global glacial retreats. But for scientists concerned about the impact of glacier melt, it is important to know whether these recent losses are due to natural variability, or to man-made climate change.

The team concludes that ”Our data suggest that the Patagonian ice fields are contributing to sea-level rise at an increasing rate. This mirrors the significant rise in global temperatures detected over the past 30 years, supporting the conclusion that there is a global trend toward enhanced glacier frontal recession in recent decades and providing support for the assertion that glacier recession can be attributed to recent warming.”

“Visiting Patagonia, we find the rebirth of native culture that once existed in this part of the world, as a couple of brother mix ancestral music with modern sounds. Explore the wild life of the region and what attracts people to this isolated and yet magical part of the world.”(From Univisions' Mosaico Series)

Among the indigenous peoples of Patagonia are the tribal groups collectively known as the Tehuelche.

Tehuelche is a Mapudungun word meaning “Fierce People”. They were also called Patagons, thought to mean “big feet”, by Spanish explorers, who found large footprints made by the tribes on the Patagonian beaches.[4] These large footprints were actually made by the guanaco leather boots that the Tehuelche used to cover their feet.

It is possible that the stories of the early European explorers about the Patagones, a race of giants in South America, are based on the Tehuelche, because the Tehuelche were typically tall, taller than the average European of the time.[5] According to the 2001 census [INDEC], 4,300 Tehuelche lived in the provinces of Chubut and Santa Cruz, and an additional 1,637 in other parts of Argentina. There are now no Tehuelche tribes living in Chile, though some Tehuelche were assimilated into Mapuche groups over the years.

Another group of First Peoples is the Mapuche… 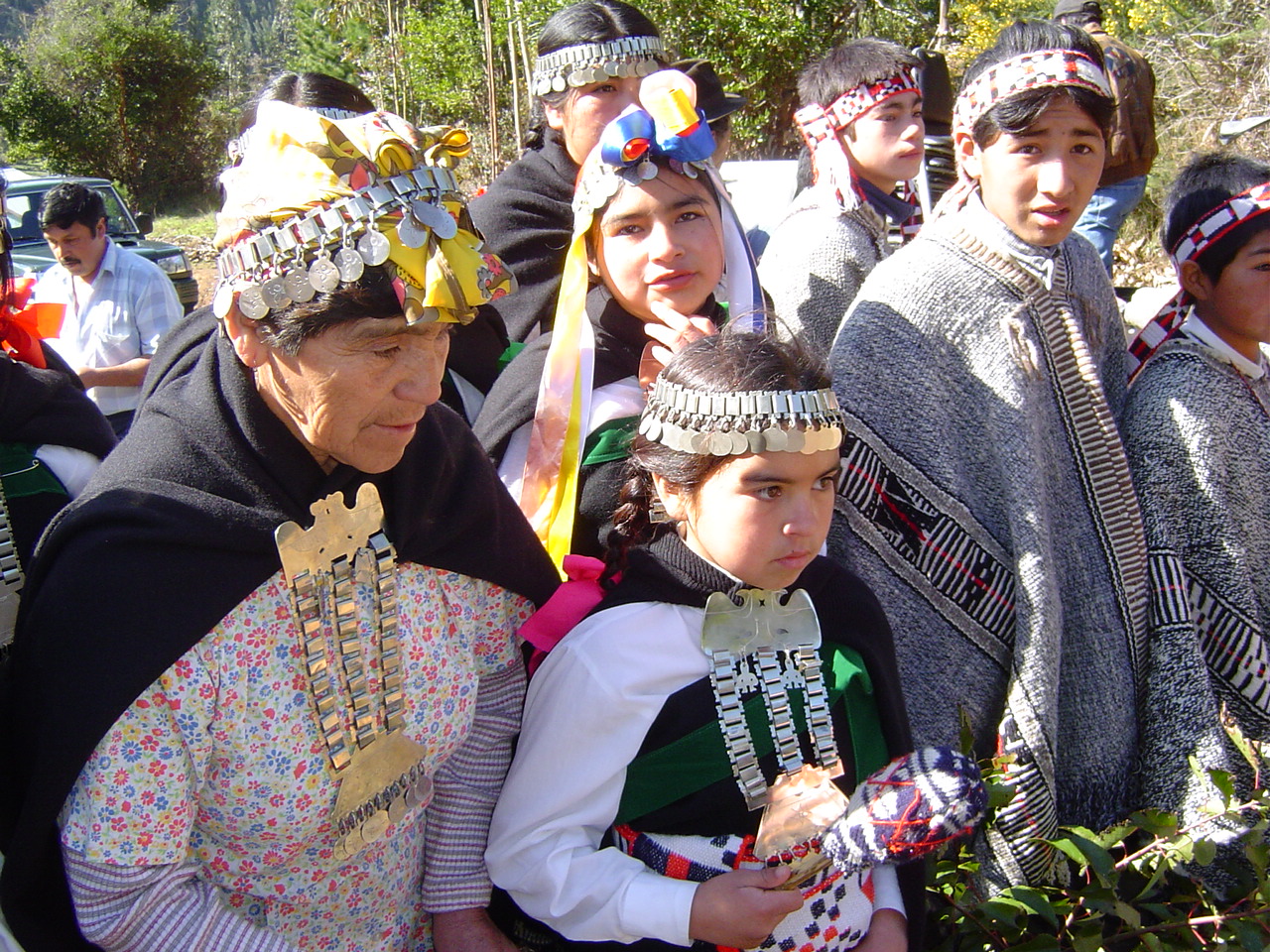 …are a group of indigenous inhabitants of south-central Chile and southwestern Argentina, including parts of present-day Patagonia. The collective term refers to a wide-ranging ethnicity composed of various groups who shared a common social, religious and economic structure, as well as a common linguistic heritage as Mapudungun speakers. Their influence once extended from the Aconcagua River to the Chiloé Archipelago and spread later eastward to the Argentine pampa. Today the collective group makes up 80% of the indigenous peoples in Chile, and about 9% of the total Chilean population[1] They are particularly concentrated in Araucanía. Many have migrated to the Santiago area for economic opportunities.

Also called Araucanos, this nation from the Chilean territory spread all around Argentina. In the times of the colony, they occupied all the pampas territory and northern Patagonia up to a part of Santa Cruz, about 250 years ago.

Some information about traditional Mapuche instruments can be found here.

The Cultrun, a traditional Mapuche drum

“Millaray,” a song by Estela Astorga, produced by the Cañete Mapuche Museum

Some views of a Mapuche wedding ceremony

Meanwhile, the transforming climate is whacking the area very hard:

BUENOS AIRES, Sept. 9 (Xinhua) — Climate change is affecting Patagonia region in southern Argentina, where the average temperature has risen almost one degree in the past five decades, the Argentine National Meteorological Service (NMS) said on Monday.

The NMS said that a latest research showed “the biggest increases in the mean minimum temperature since 1961 have been detected in the Patagonian cordillera, Cuyo and northwest Argentina.”

“In Patagonia, Cuyo, the northwest and part of the coast, there has been an increase in the mean annual temperature over the past 52 years, where the most significant readings range between 0.5 and 1 degree Celsius, a warming that is most notable in spring and summer,” said Jose Stella, an expert at the NMS Weather Department.

According to Stella, global warming is the main reason that leads to the rise of mean annual temperature.

Patagonia: It’s not just a good-karma line of clothing.