As the Poughkeepsie Journal reports, they take environmental awareness seriously in New York’s Hudson River Valley. After all, it was here that engaged citizen action took shape in the form of the sloop Clearwater, the brainchild of folk master Pete Seeger. So when the Beacon Sloop Club (which handles many of the events associated with the Clearwater’s travels, such as an annual “Strawberry Festival”) recently received an unexpected windfall from a source with, um, questionable karma, it catalyzed a powerful discussion. 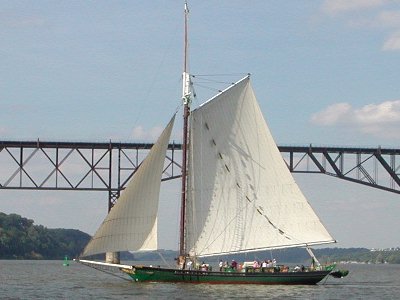 Chevron, that giant, soulless, sociopathic energy monster, purchased Texaco (another giant, soulless, sociopathic energy monster) a little over a decade ago. The Texaco Research Center (what passed for the brain of that particular G.S.S.E.M.) was based in Glenham, New York, and at one time employed over a thousand people. After the consolidation, the Center closed down, and Chevron has spent the past decade cleaning up.

As you can probably imagine, cleaning up a petrochemical research center is a long and messy process, and it necessarily involved local residents and advocacy groups…including the Beacon Sloop Club, which recently received a check for $1,000 from Chevron in recognition of their participation.

This triggered a crisis of conscience, needless to say. The Sloop Club’s membership felt somewhat uneasy with Chevron’s money.

“One of the Sloop Club’s general premises — and Pete Seeger’s — is broader than local,” club member Connie Hogarth said. “It’s cleaning the Hudson as a prototype for what should be happening all over the world.”

Some wondered whether the club should return the check. Others thought it should be put toward local efforts.

But Hogarth and others rallied around a different idea. The proposal was to donate the check to an organization that supports indigenous people who live in rainforests in Ecuador.

The reasoning was based on another legacy Chevron inherited when it purchased Texaco — an epic court battle waged over decades in a half-dozen countries. At issue is pollution, which Texaco has been blamed for causing in the Ecuadorean rainforest in the 1970s and 1980s.

The original lawsuit was filed in 1993, dismissed by U.S. courts and refiled in Ecuador in 2003. In 2011, a provincial judge awarded the plaintiffs — the residents of the rainforest — $19 billion.

Chevron has refused to pay, saying that an Ecuadorean national oil company was responsible, not Texaco. And it has filed lawsuits in the U.S. accusing the plaintiff’s lawyer of using bribes and made-up evidence to support the case before the Ecuadorean court.

On Jan. 3, the issue came up on a much smaller stage — the confines of the Beacon Sloop Club’s headquarters.

There, the members voted to direct the $1,000 check from Chevron to the Pachamama Alliance, a nonprofit based in Oakland that represents the interests of the indigenous people of the Amazonian rainforest.

“This,” Hogarth said, “carries the message not only of not accepting money (from Chevron), but also that we care about the people in Ecuador. It gives the Sloop Club a chance to become a prototype for others in similar situations, to know that there are alternatives.”

The Pachamama Alliance was…

“…created at the invitation of the Achuar, an indigenous people of the Amazon rainforest.

Learn more about our indigenous partners, The Achuar »

Having made their home in the rainforests of Ecuador and Peru for centuries, they have much wisdom to offer about living in harmony with the natural world and with one another.

In the 1990’s, facing oil development on their ancestral lands, Achuar elders decided to reach out to the modern world that was threatening their very existence.

They issued a call for allies who would work to “change the dream of the modern world” and transform the culture of overconsumption driving the destruction of the rainforest.

The Pachamama Alliance was created as an answer to their call.
– See more at: http://www.pachamama.org/about#sthash.ALw6HY0C.dpuf