Take, for example, England, which has been on the business end of extreme weather since December. Storms have tossed giant boulders around and rearranged the landscape, in some cases demolishing natural landmarks that have stood for countless millennia. Extreme rains have flooded huge swaths of farmland, destroyed roads and buildings, and eliminated transport access to entire towns.

Britain has its own conservatives who’ve swallowed the denialist kool-aid, and they’re having a hard time reconciling the obvious facts of nature’s fury with their ideological opposition even to such anodyne policies as investing in flood prevention measures. 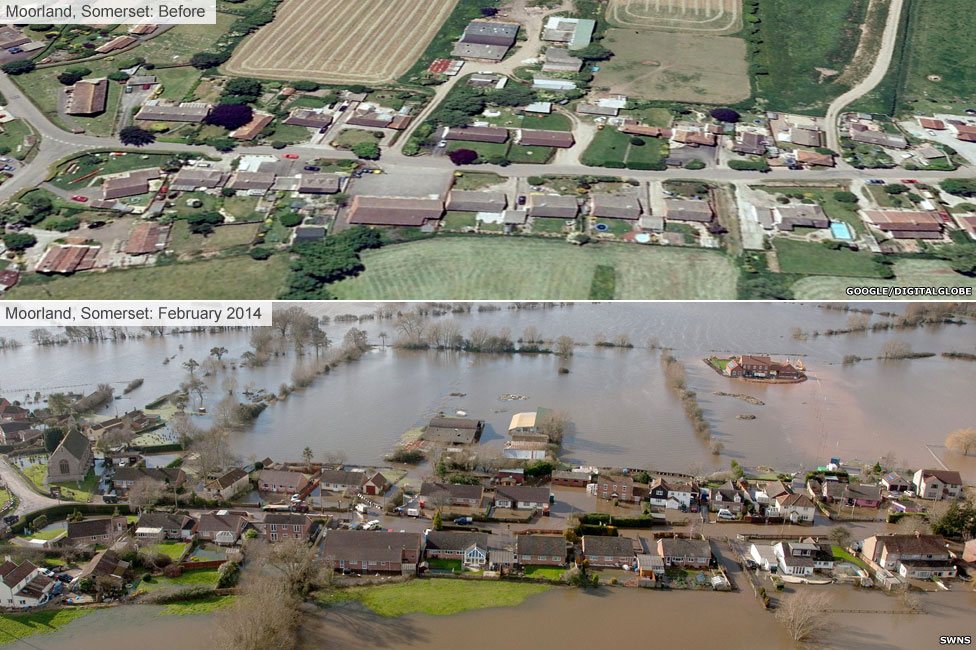 Somerset, before and after the massive storms of last week.

…scientists such as Dr. Jennifer Francis have warned that polar sea ice retreat was causing in a weakening of the Jet Stream, creating the potential for very severe weather situations during the Fall, Winter, and Spring months as well as heightening the number of more persistent weather patterns called blocking patterns. In addition, since 2004, we have observed a slowing of the Gulf Stream by 10-15% even as Greenland melt rapidly intensified.

These changes, by 2012-2013 appeared to be, with increasing frequency, delivering severe weather to Europe. During this time, the region suffered one of its most severe Winter-Spring periods on record. And with the English storms, the Italian floods and the Balkan snows, 2013-2014 looks like a disastrous repeat.

Unfortunately, we are likely just at the start of a period of increasingly severe weather. Greenland melt will continue to ramp up, the Gulf Stream will continue to weaken, the Jet Stream will undergo radical change as the center of cold weakens and bounces around the Northern Hemisphere, trying to find a home. And human caused global warming will continue to add heat energy, increased rates of evaporation, and instability to the equation. So we are in the period where the storms grow worse and worse over time. And this is a fact we had better get used to. Something we had better prepare for and do our best to mitigate. For it is not something a comfortable denial can simply wish away.

England has a long tradition of regional brass and “silver” bands:

In Cornwall, the Lanner and District Silver Band is primus inter pares:

But it isn’t all brass bands. Here’s The Devils Rejects, a rowdy band from Dorset:

And more from the 2009 Dorset music awards:

Needless, it’s hard to maintain a brass band or music festival when you’re the middle of a climate catastrophe. If you care about the future of these vibrant musical traditions, you’ve got no choice but to face the facts.