Baltimore is lucky. One of the city’s local fixtures is a fascinating cat who goes by the name of Abu The Flute Maker. He started out life as William Emerson, growing up poor in West Baltimore and shifting homes from one relative to another. But by the mid-70s, he’d begun making instruments out of whatever happened to be lying around, saying simply, “Anything that makes noise can be a musical instrument. It’s just a matter of knowing what to strike it with, where to split the air column and how to tune it.” Now, he’s a frequent visitor to the city’s schools and community events, showing off his creations and inspiring kids:

“When you make your own thing,” he tells the kids, “you can name it like you want to name it.”

A favorite with this audience is the “Bedpostaphone,” a saxophone that began life as a bedpost.

“A bedpost!” One second-grader can’t believe her ears. But when Abu begins to play the “Pink Panther” theme, hearing is believing. There is widespread wiggling, giggling and air-Bedpostaphone playing. There is also clapping along — and hasty shushing of clapping (grown-ups take a little longer to catch on).

The string section includes the “Electric Coat Hanger Harp” and the “Bass Harp,” a conglomeration of metal trash can, 2-by-4 plank and parachute cord.

Percussion? There’s the “Wrenchophone,” the “Army Helmet Bongos” and the “Thunder Drums,” three 6-foot drums made from the porch columns of a demolished rowhouse. 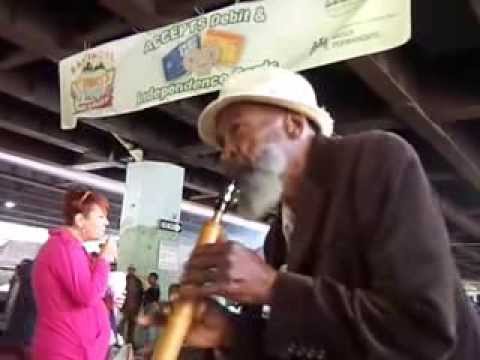 I love this guy. You will too.

One thought on “Friday’s Recycled Instruments: Meet Abu The Flute-Maker”