Neil Young, that great old DFH, has always been a stand-up guy. Now he’s tackling the ongoing crime against Earth which is the exploitation of the Canadian Tar Sands. It’s also a crime against the native peoples who live in that part of the world, and who’ve seen their ancestral homelands turned into a metastasizing toxic waste factory in order to feed the carbon addiction of the industrialized world. 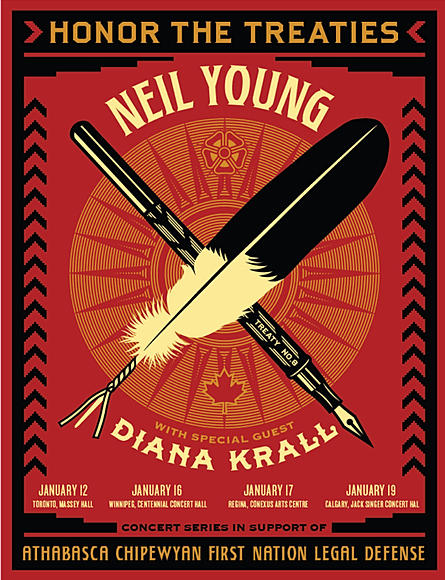 The Athabasca Chipewyan First Nations and other communities live at the front lines of the largest industrial project on earth. Much of ACFN’s traditional territories are home to tar sands rich deposits eyed by industry for exploitation.

Tar sands extraction methods cause large scale and irreversible harm to our health, land, water, wildlife, and the global climate system that supports all life. Canadian and Albertan environmental protection laws have been greatly eroded in recent years, and what laws do exist are rarely if ever followed, or law-breakers penalized.

Despite these and other well documented problems, industry and government plan to triple tar sands production, and won’t even stop there.

The last remaining stronghold for challenging this mad rush lies within the rights and title held by First Nations peoples.

The Tar Sands is a short-term disaster. People, animals, and vegetation living near the extraction sites have their lives catastrophically disrupted at best, painfully ended at worst.

The Tar Sands is a medium-term disaster. The crude oil extracted is incredibly dirty; when (not if) it spills, it spreads sickness, destruction, and misery everywhere. Pipelines, trucks, trains, tankers…doesn’t make a difference.

The Tar Sands is a long-term disaster. Climatologist James Hansen calls it “game over for the climate,” but this phrase is misleading; this ain’t no game. This ain’t a sporting event: humanity doesn’t get another chance in next year’s playoffs. This ain’t a video game where we yawn, stretch, get another bowl of popcorn, and begin again. It’s only “game over” if you imagine a planetary version of the football riots in Egypt that killed 79 people and injured thousands in 2012.

If another nation dropped a bomb on Canadian forest land, exterminating everything within a 42-hectare space, it would rightly be condemned as egregious aggression; an act of war. If a sectarian group did the same thing it would justifiably be called terrorism. Why is it that when the same damage is committed by a multinational corporation…it’s simply part of the cost of doing business? Who’s the terrorist in this picture?

The Athabasca Chipewyan First Nations are carrying out some of the most important acts of civil disobedience in the history of activism. They need your support, and mine. Please give generously.