Any survey of the Canary Islands’ soundscape must begin, not with the Islands’ wonderful musical traditions, but with the Silbo Gomero, the world’s only whistled language, which is structurally identical with Castilian Spanish, but replaces the spoken language’s vowels and consonants with whistled sounds. These sounds are differentiated by their pitch and continuity, and there are apparently even local dialects inside the community of Silbo Gomero speakers…um, whistlers.

The Canaries’ culture is a fascinating mix of Berber, Spanish, Latino and Caribbean influences, and the music shows this rich syncretism.

Perhaps the most distinctive Canarian instrument is the timple, a small variant of the guitar with four or five strings. While it’s often simply strummed to accompany singing, soloists like Totoyo Millares can make the instrument accomplish wonders.

From a concert honoring Totoyo Millares.

Other stringed instruments commonly found include charangas, lauds and guitars. There are plenty of percussion instrument including castanets, panderetas, and a variety of drums. A wooden flute called pito herreño is popular on El Hierro island:

A traditional song and dance from Tenerife: 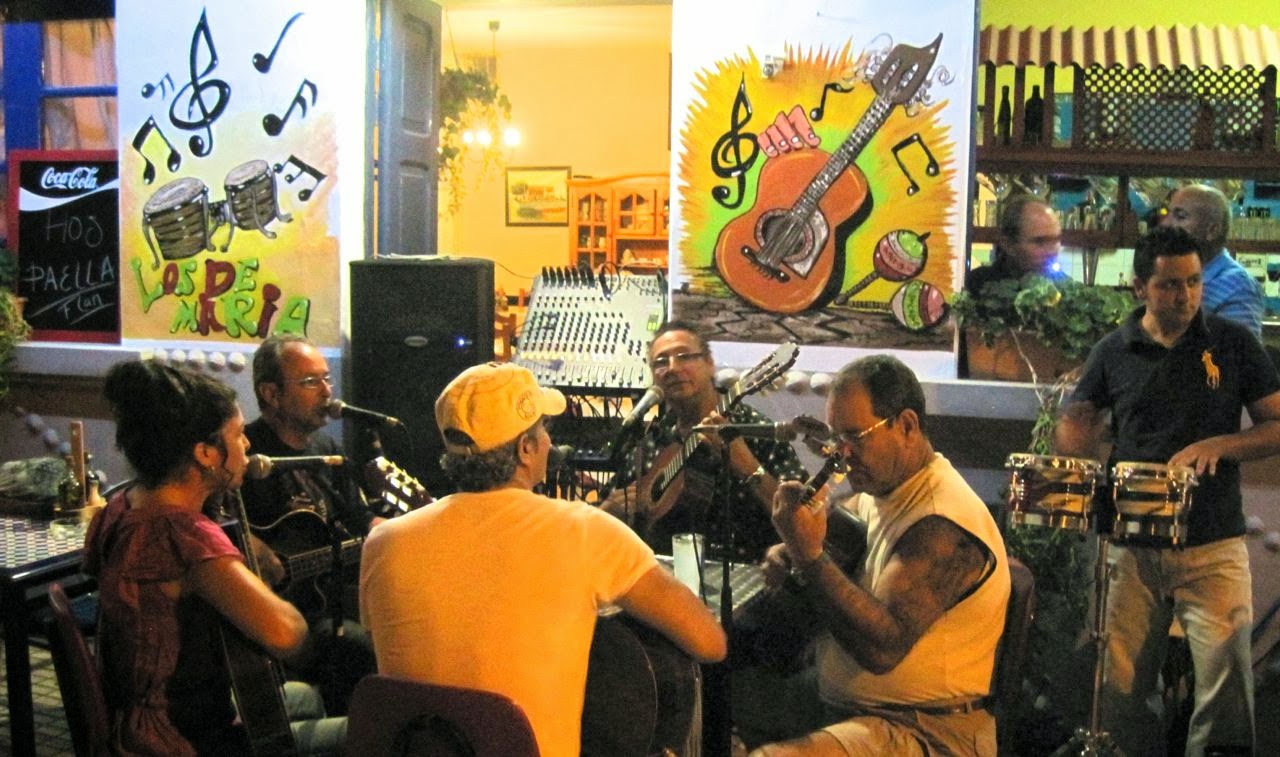 Canary Island folklore has evident mainland influences (Spanish and Portuguese), although it has also found inspiration in South America, with whom it has so many ties, and also draws on its own native history and experience. Where these native roots can be most clearly seen is in certain airs from islands such as El Hierro and La Gomera.

From this melting pot has emerged a popular music with a clear personality of its own, although the “isa” is derived from the “jota” and one of the most popular songs is called a “malagueña” (from Malaga). The “folia”, rhythmic and sensitive, and the “tajaraste”, cheerful and syncopated are the four most typical airs of Canary Island folklore music. To understand the full wealth of Canary Island music, other not so well known songs must also be added, like the “tango de la Florida”, the “aires de Lima”, the “sirinoque”, etc.

Canary Island folklore has been studied and renovated in recent years by solo artists and groups that have had major successes in their investigations and big hits with their music. They include “Los Sabandeños” – the most successful – and “Añoranza” from Tenerife, “Los Gofiones” from Gran Canaria and “Taburiente” from La Palma.

Here’s an American couple on vacation, dancing to the music of Los Sabandenos: 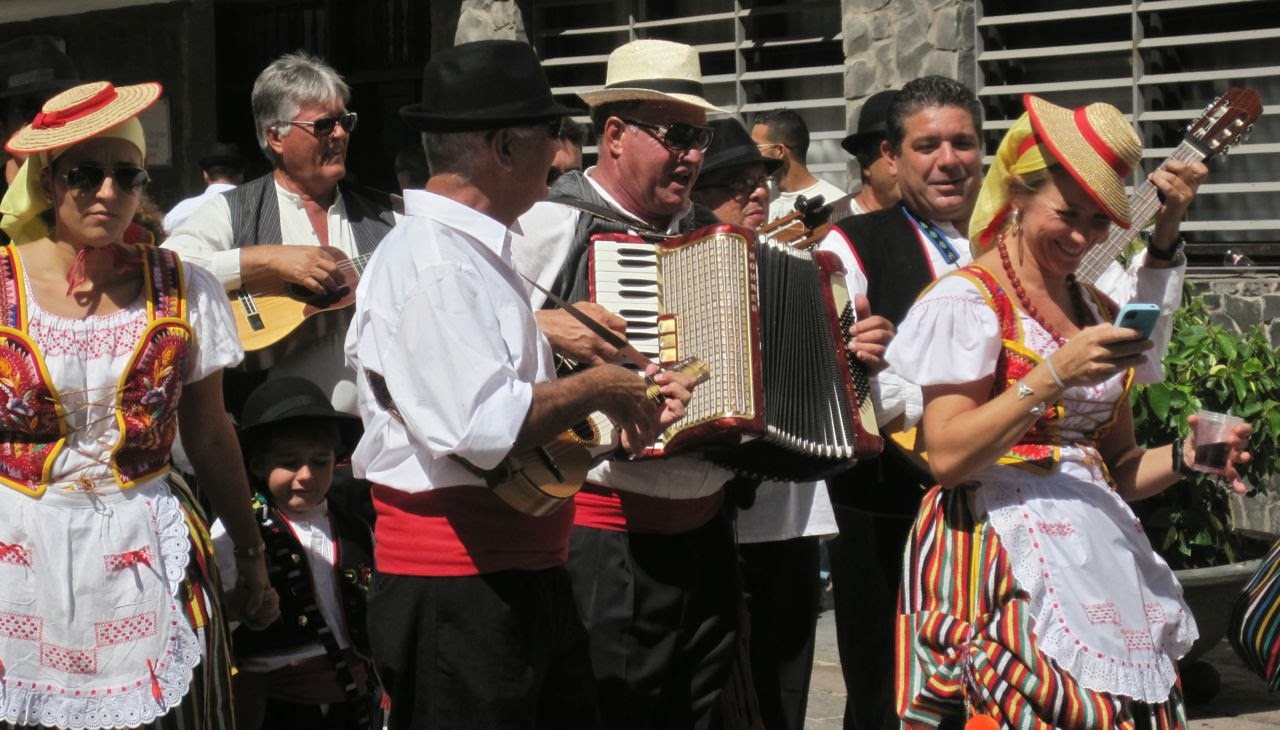 And “Sombra del Nublo,” a beautiful song from Los Gofiones:

A Canarian folkloric group in Tenerife

Samuel Charters, that determined explorer of African diasporic music, describes how he discovered African roots in classical guitar tradition, via the Canaries:

“It was only chance that had brought me to the islands. I had never been conscious of any African-derived music that had its roots in the Canary Islands. One morning I turned on my kitchen radio to a classical radio station…(to) a selection of instrumental pieces performed on a baroque guitar….Then as I was standing by the sink I heard a different rhythm, a different melodic shape in the new piece he had begun. I carefully shut off the water and stood silently with the sauce panI was holding in my hand, waiting for some announcement when the music was finished. Instead of the measured seventeenth-century polyphony and the complex chordal structures of the other pieces…this was a little melody that repeated itself over and over against a steady pattern of minor harmonies. The melody itself never felt tightly bound to the chords or the rhythms in the bass strings, and for stretches of the piece the harmonies were plucked with lightly syncopated accents….What I was hearing, however stiffly it was woven into the studied phrasing of the guitar transcription, was an African-derived reshaping of a European musical dance form…It was a composition by a Spanish composer named Sanz, and the piece that had made me stop what I was doing in the kitchen was called “Canarios.” The Canary Islands, at that moment, became somewhere I had to visit.”

Here is the 1674 notation in guitar tablature for one of Gaspar Sanz’ canarios’:

Meanwhile, of course, there’s climate chaos, whistling around the corner. According to “Climate change and biodiversity in the European Union overseas entities” by Jerome Petit, Guillaume Prudent, there have been significant impacts on wildlife populations — particularly fish and bird species — already. Worse damage is on the horizon:

“Some 30 species of birds of Saharan and sub-Sahel origin were recently observed in the Canary Islands by the Global Nature Foundation; they have never before been spotted in the region. Among the new arrivals were the Greater Hoopoe lark, the White-crowned wheatear, the Long-Legged buzzard, the Desert wheatear, the Asian desert warbler, and the Egyptian nightjar. The presence of some species is sporadic, while others…have begun to nest on Fuerteventura in the the last five or so years. Desertification of this island might be responsible for these introductions, but stronger data are necessary to confirm this hypothesis.

There has been a general wave of birds from warm regions moving north as a result of climate change, either in an attempt to flee the arid conditions in their area of origin, or in search of warmer conditions in the Nordic regions. A recent (2007) report by the RSPB suggests the spatial distribution of all European birds could shift some 550 kilometers to the north between now and the end of the century; three-quarters of species will be unable to migrate and as a result will go into decline.”

“Many species of tropical fish were observed for the first time in Macaronesia because of the rise in water temperatures. For instance, the Ocean triggerfish, a warm water fish, was recently observed in the vicinity of the Canary Islands. Climate change could seriously modify the composition and abundance of fish stocks in the region.

In addition, the Canary Island corals, largely made up of very fragile cold-water species, could also be threatened by a rise in temperatures and acidification of the sea water.

Finally, changes in climatic conditions have resulted in exceptional flowering of marine algae around the coasts of the Canary Islands. This phenomenon could increase in the region with a rise in water temperatures, and affect all the marine ecosystems.”

“The socio-economic implications of climate change in the region are numerous. The number of heat waves is likely to increase and will directly affect the human populations of these islands…..A rise in temperatures could also facilitate the spread of tropical diseases, especially insect-borne diseases which could multiply rapidly. An increase in dust-charged winds from the Sahara could increase the incidence of allergies and respiratory problems.

A decrease in fish stocks would shave an impact on the fishing industry. Aquaculture, a fairly recent activity in the archipelago, could also be affected by a change in climate conditions.

Finally, and most importantly, increased warming in the archipelago could seriously affect the tourist industry, the main pillar of the archipelago. An increase in the number of heat waves, like the one which hit the region in 2003, could discourage visitors during the summer months. Desertification of the natural landscapes would also reduce the attractiveness of these islands.”

Some rather grim charts of likely futures for the Canaries can be found here.